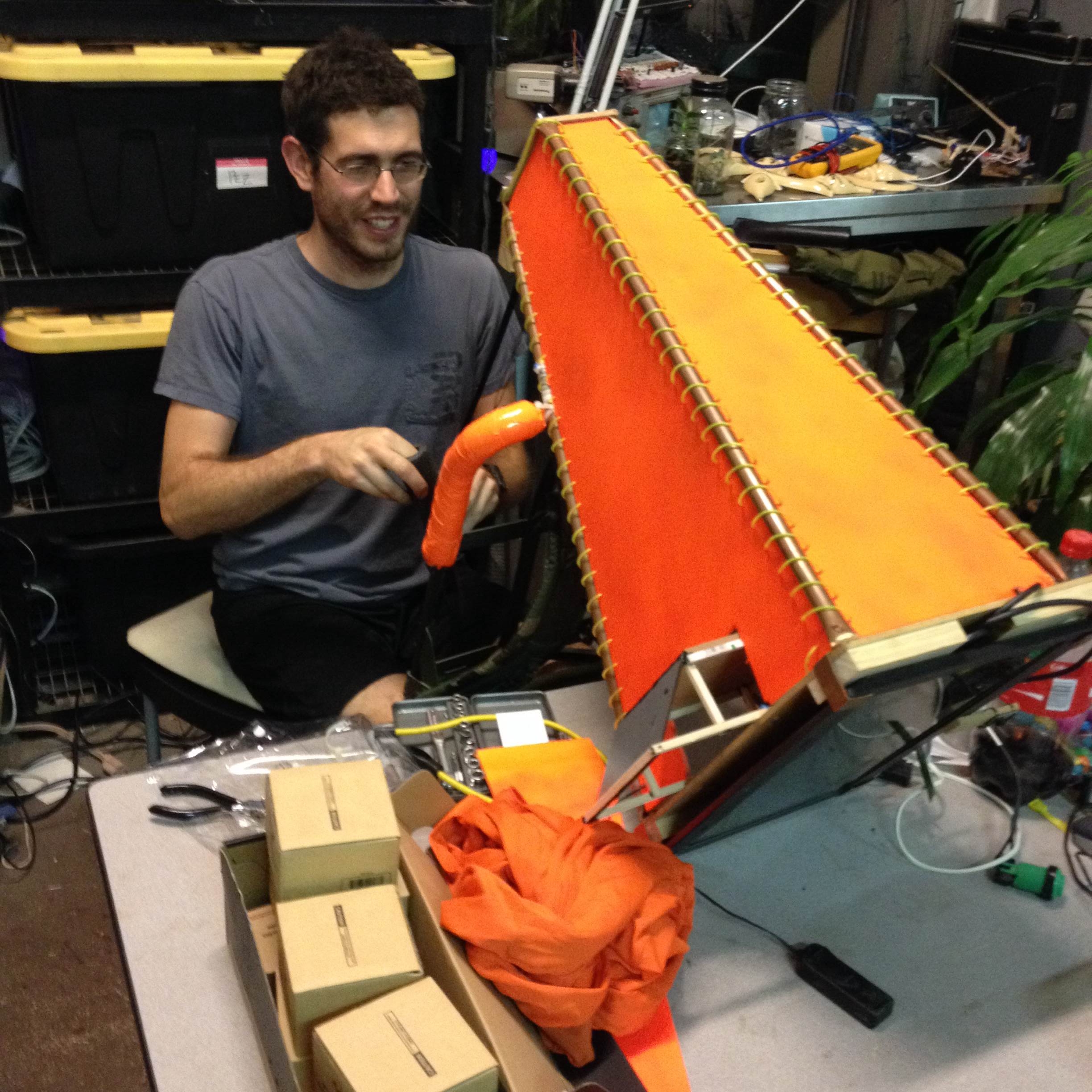 It’s been a while, but here’s the second post on making the Hivelord. This post will focus on the frame of the Hivelord mask, which is mostly made of copper tubing and scrap wood. Unfortunately this means it is relatively heavy for something mounted around my head, but I found a military external frame backpack that works well to transfer the weight to my hips. The length of the mask helps balance it over the frame, and I added an adjustable strap to the back to hold the laptop screen in the right position in front of my face. The end result is surprisingly comfortable!

To start, check out those copper tubes. This may have been the most expensive part of the project, I spent around $60 on copper tubing. I bought a few lengths from Home Depot, cut them into fourths, and then hammered the ends flat. You can also squish the ends in a vice to flatten them, but hammering it was a lot more fun. Once the end was flat, I carefully used the drill press to put a hole in them, then bent the end to an appropriate angle. Use a vice to hold the flat part while you bend it. I used some spare nuts and bolts to hold the copper tubing to the wood part of the frame. 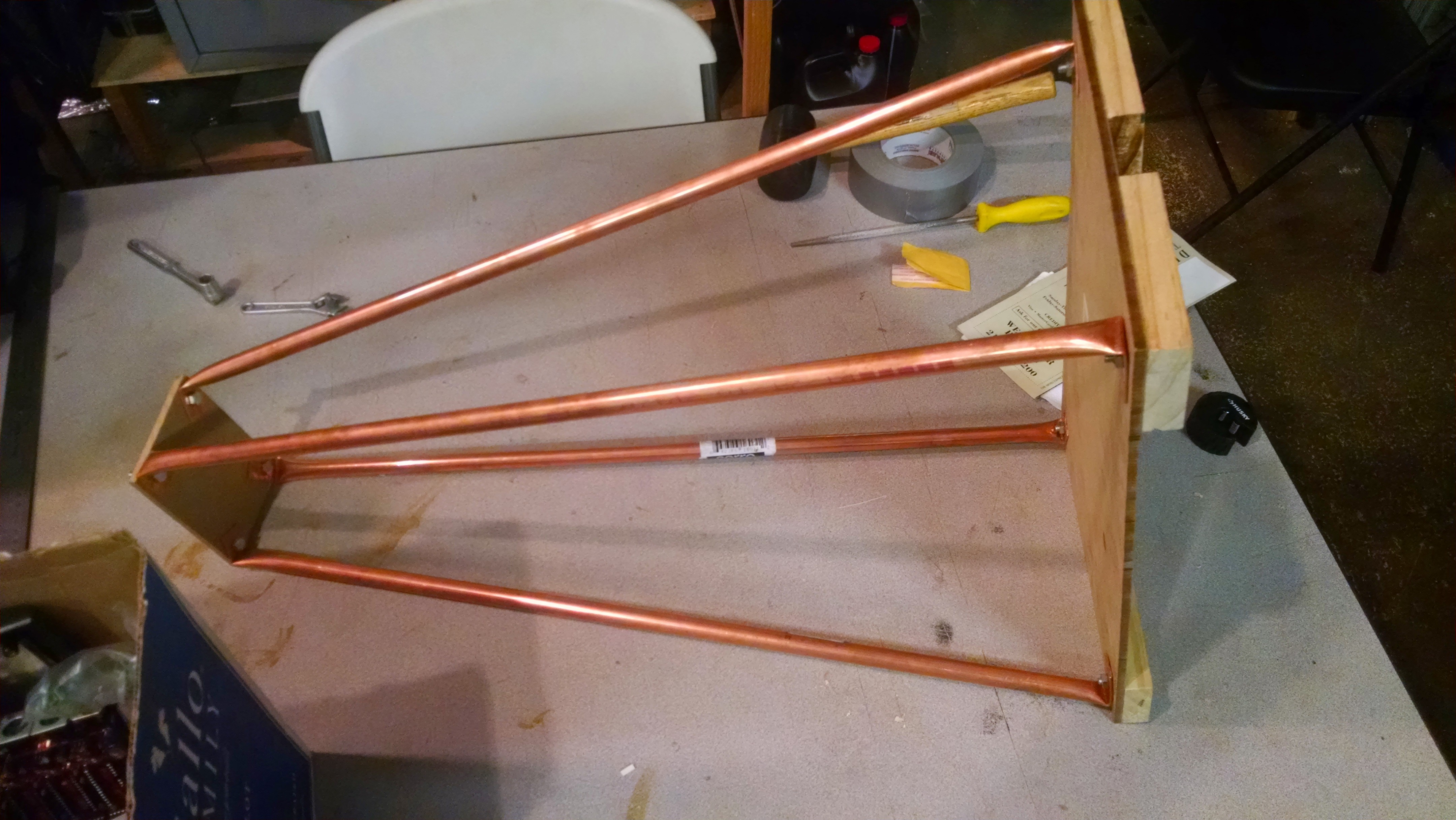 Here’s the mount for the screen. The backside of the repurposed laptop screen sits on those wooden blocks, which are glued to the wooden board. I drilled those holes in the block and then hot glued the nuts inside them so you can tighten the bolts into place with the screen installed on the front. There’s enough space between the laptop screen and the mounting board to house the screen converter. I was originally going to put a camera on the inside to project my face onto the screen, so I designed the mask to be around 9 inches in front of my face. 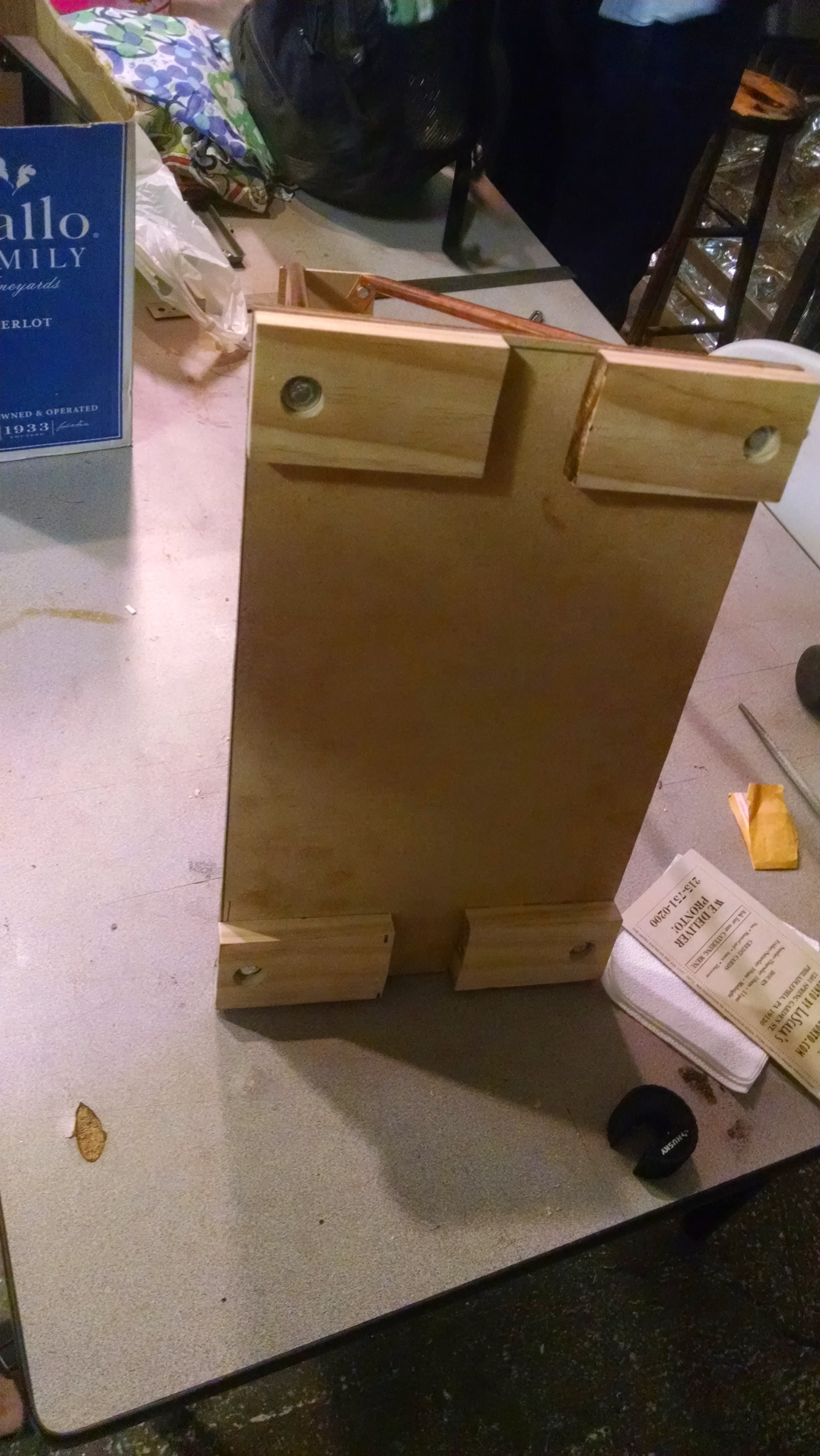 Here I am making sure my head fits in there.

Now, to attach the screen. I had some scrap copper tubing left over, so I made some custom brackets to hold the screen in place. Flatten the tube with a hammer and bend it in the vice. Hit the bend with the hammer a few times to express yourself and give the bracket a nice 90 degree angle. I pretty much made these up as a went along, marking where the bend had to be and then making it in the vice. 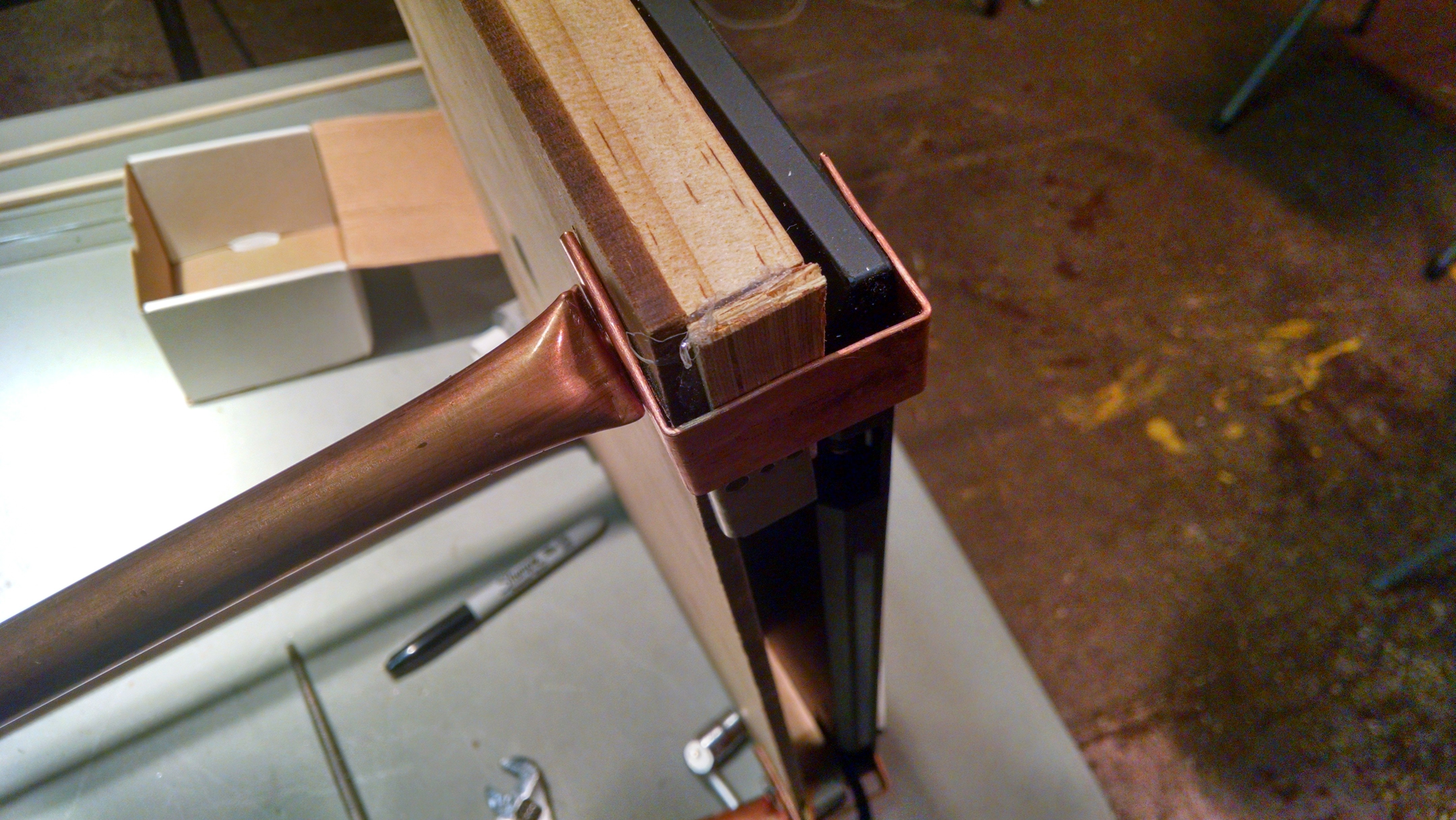 The whole thing is held onto the backpack frame with a few zip ties. I was originally just testing it out with the zip ties, but they worked so well I kept them there. You can see a metal wire coming down from the back mount board. That was replaced with a backpack style strap, allowing me to adjust whether the head is looking down or up and counterbalance the mask. 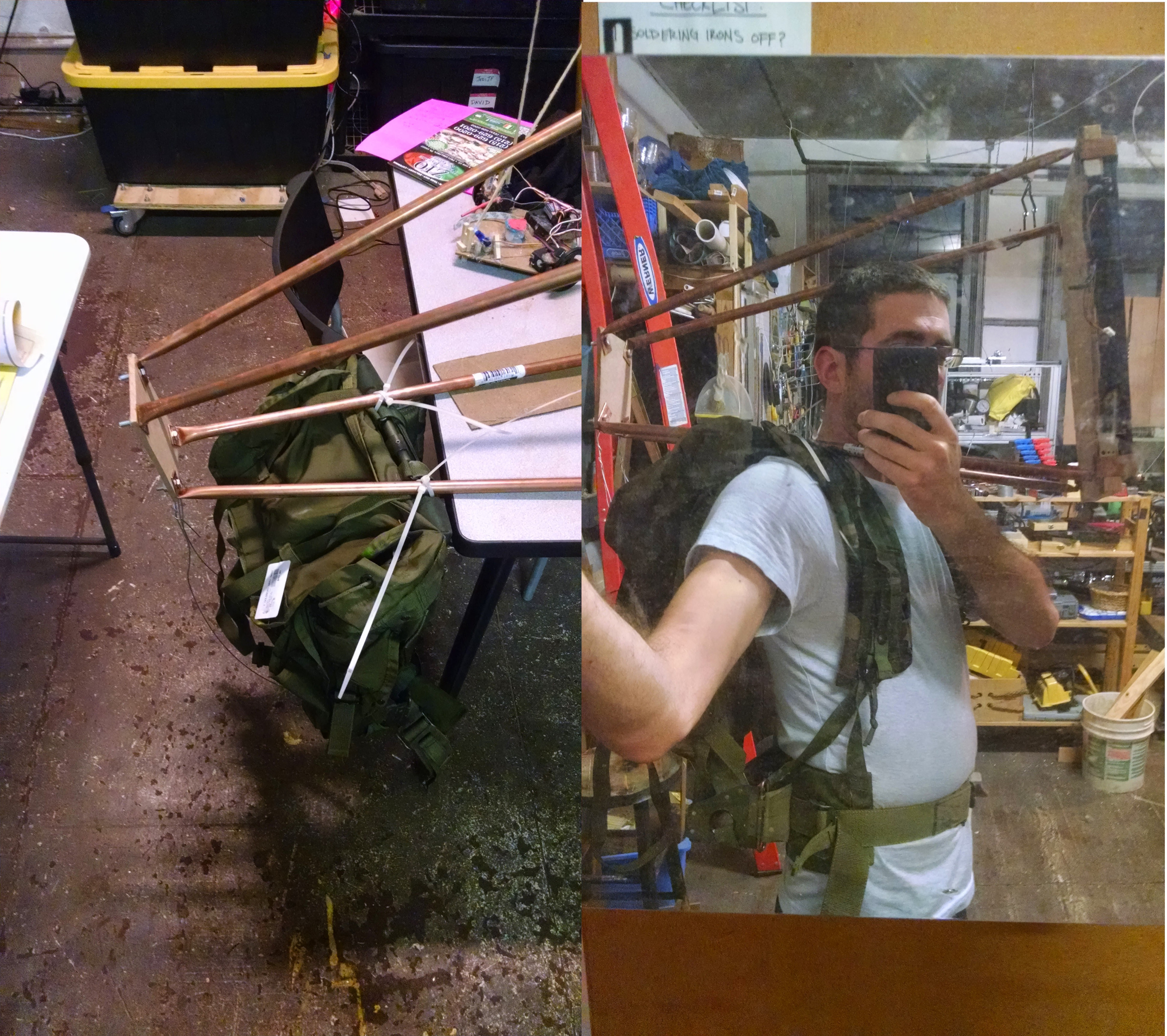 Here’s the periscope. It took me a few beers to convince myself that this would be a good idea, but I was surprised at how well it works. It’s made entirely out of hot glue, square dowel rods, two mirrors, and some math. If I had to make it again I’d make the mirrors a little larger, you can only really see out of it with one eye.

Next I tested out the electronics. The screen was upside down but that was simple enough to change in the raspi. I mounted the electronics to the wood board behind the laptop screen. It’s always been a wonder to me what’s the best way to mount electronics to a solid surface. This time around I penciled in where the mounting holes were on the pcb, then I drilled some pilot holes in these spots. A dab of hot glue held the boards in place as I put in screws and or wood nails through the pilot holes. Of course, most of these stuck out the other side of the board, so I used the dremel to cut off the pointy ends. In the end it was pretty solid but the process was a bit nerve wracking. 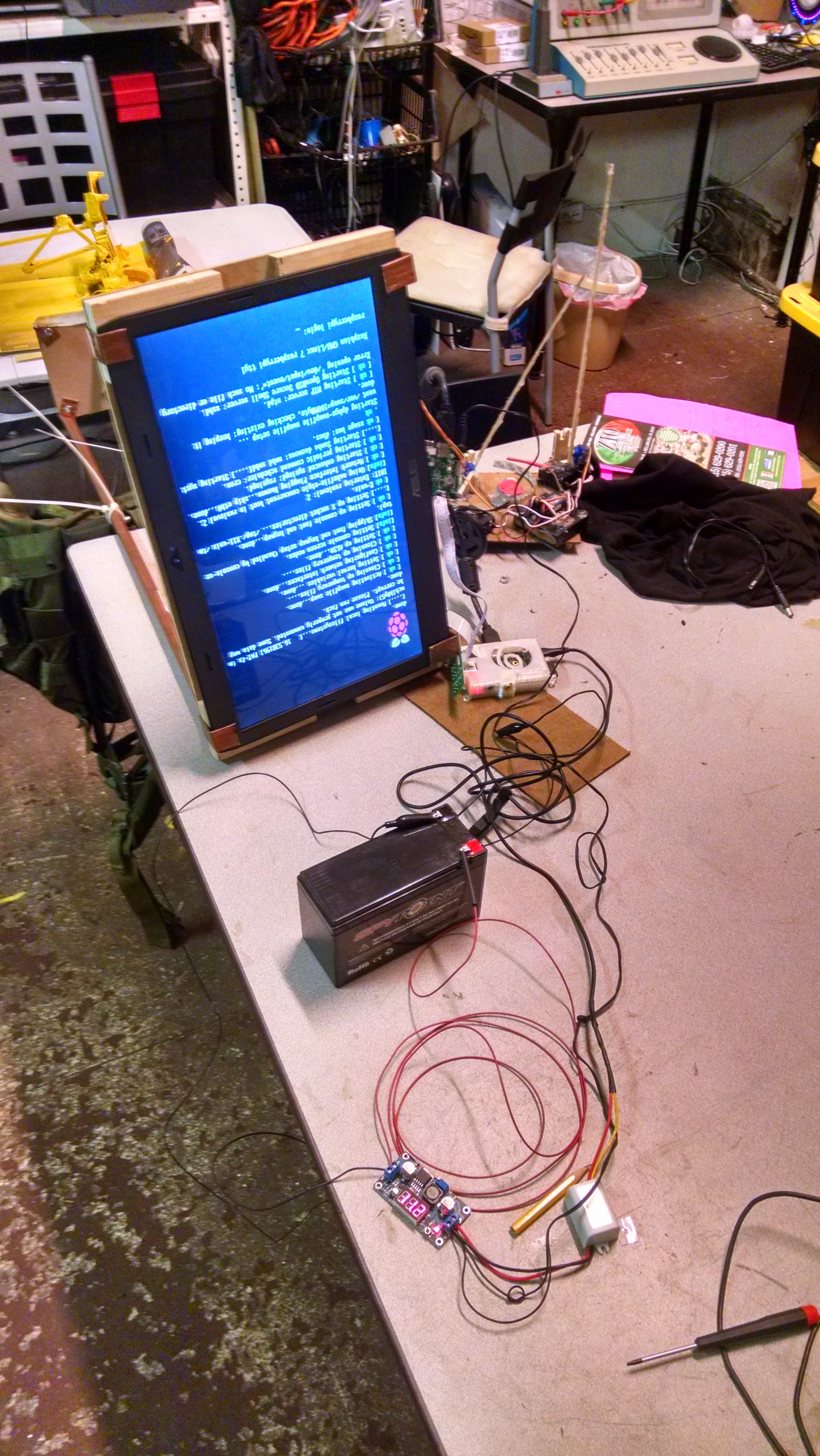 Last but not least I had to cover up the sides of the frame. I found some scrap foam board, cut them out to size, and then spray painted the panels orange. They are held to the frame with EL wire threaded through the foam board, with the copper tube in between. I marked every half inch, then used the drill press to make some clean holes in the foam board. It took a while to thread the wire though, but I was amazed that each side required exactly 15 feet of EL wire. Sometimes you luck out when wingin it. 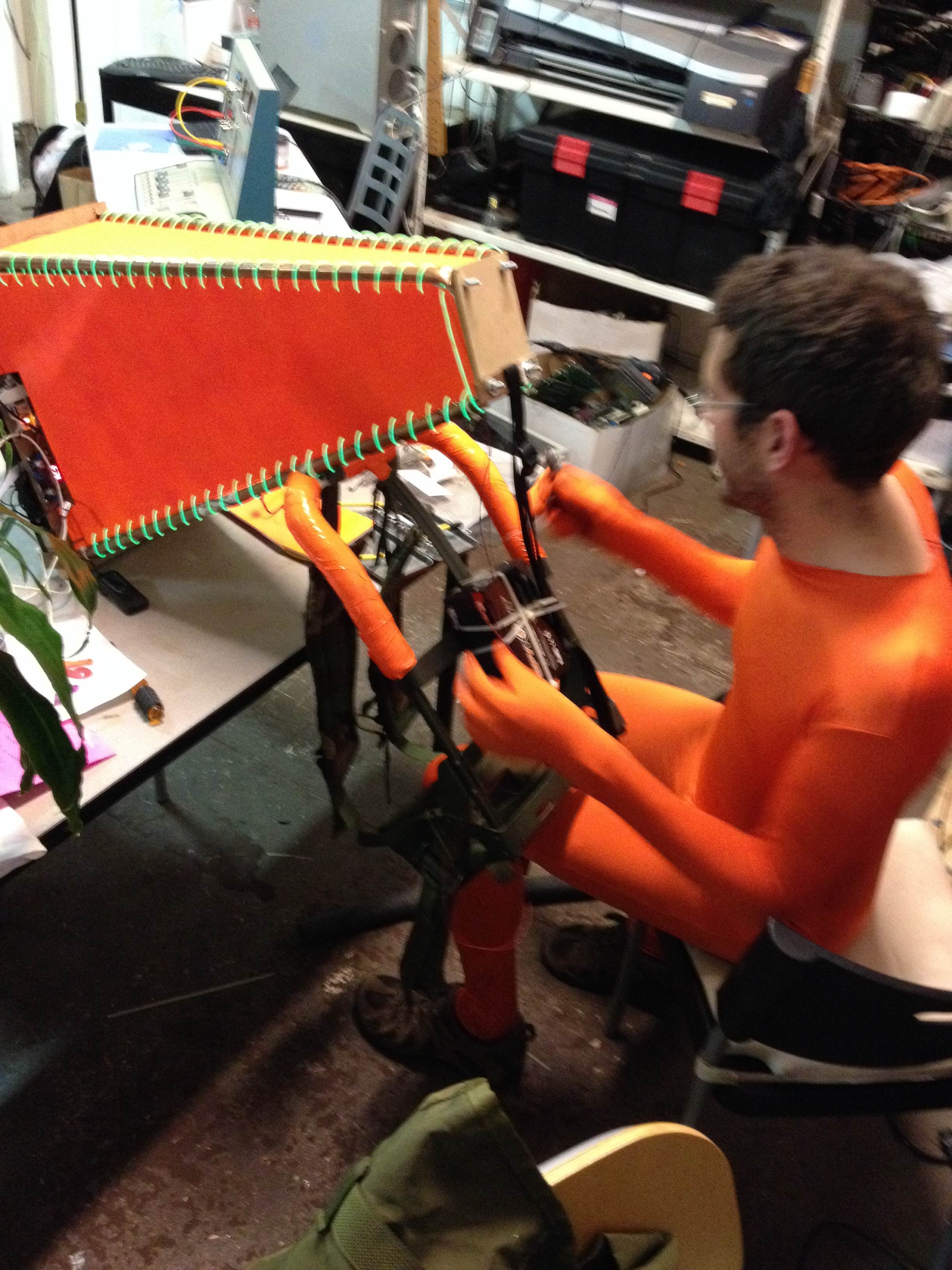 Thanks for reading. Next up will be a post on the Boomfists I designed for the Hivelord; speakers attached to my fists. They haven’t made a public appearance yet, but chances are high they will make an appearance with the rest of the costume at MAGFest in January!