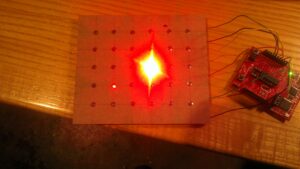 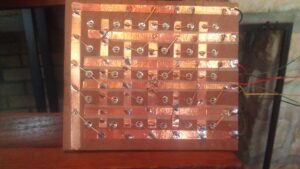 The resulting circuit allows you to individually address any of the thirty LEDs in this 5×6 matrix using only six lines from a micro-controller.

It turns out that this assembly technique is pretty quick.  It’s also physically robust.  Best of all, it’s cost effective — copper tape is relatively inexpensive and masking tape is downright cheap.  To get some perspective on how this compares to other assembly techniques cost-wise, go price a custom printed  4.5″ x 5.25″ circuit board.

This technique can be used to assemble arbitrarily large tiles.  In fact, the larger the tile, the more effective the technique is with regard to saving time and money.  And, as a fortunate coincidence, most peg-boards happen have 5mm holes — so that means you buy the peg-board at the hardware store and jam LEDs in there perfectly w/o any drilling whatsoever — so just buy the panel, tape it up, jam in the LEDs, solder the leads and enjoy the show …